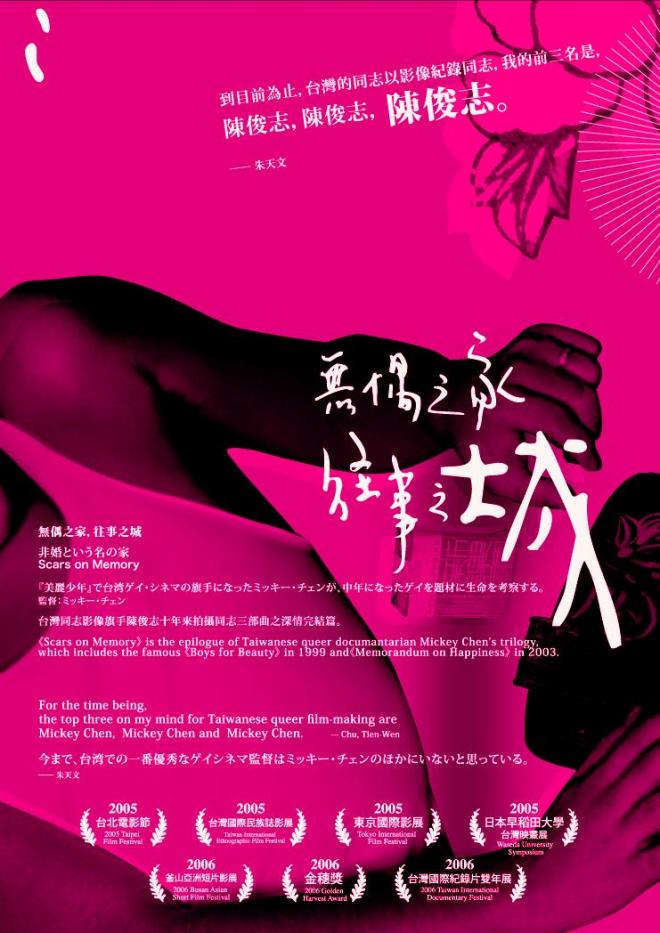 The Chinese title of this documentary translates literally to “A home without a spouse, the city of the past.”  It is directed by Mickey Chen (陳俊志), who wrote quite a good biographical book Taipei Dad, New York Mom (《台北爸爸紐約媽媽》) a few years ago. I’m halfway through it, but I would recommend what I’ve read so far – as it is a touching account of a gay man’s life without being trite or shmaltzy.

This is quite an old documentary, but not quite as old as Corners (《私角落》), which I reviewed on my old collaboration blog here. However, although I don’t claim to be an expert, I think that many of the issues raised in the documentary are still quite relevant today. The documentary starts with political opposition between two older characters from Taiwan’s gay scene: Chiang Huan-fa (蔣煥發) and Hsu Nan-hsien (余南獻). Chiang is annoyed at his friend Hsu, who he refers to as grandmother (“阿嬤”) and runs a gay sauna in Taipei, because he sees Hsu as gloating over Chen Shui-bian’s 2004 election victory, due to the wide-held belief among the pan-blue camp that Chen hired someone to stage an assassination attempt against him and running buddy Annette Lu, in order to influence voting in the Democratic Progressive Party’s favor the following day. Chiang also tells Hsu that the director, Mickey Chen, remarked that he was trying to “keep a low profile” in terms of his sexuality while supporting Chen Shui-bian and he criticizes Hsu for this. In an ironic twist by the director, however, just as Chiang is shouting at Hsu for this, he himself is very shy about his sexuality with the women he’s sitting with from the protest against Chen Shui-bian, calling for a reelection, when they ask who he was shouting at on the phone. The director even adds lines down Chiang’s face in the edit, a technique taken from Japanese manga to suggest embarrassment. This section of the documentary seemed to be drawing attention to the lack of a coherent political lobby for LGBTIQ issues in Taiwan at the time, as the pan-green/pan-blue sectarian divide obstructs the pursuit of LGBTIQ policy. The pan-green and pan-blue camp are both willing to take the gay vote, but only if it is in a “discrete” form. It’s hard to tell really if much has changed in Taipei, on the one hand protection for gay people is improving, but there seems to be a certain hesitancy to openly support LGBTIQ rights. It was only a few years ago that a DPP legislator Shih Ming-te launched a misogynistic attack against DPP chairwoman Tsai Ing-wen by suggesting that she is a lesbian and should stop “hiding” her identity as she is unmarried. The recent flip-flopping by both Taipei mayoral candidates Ko Wen-je (柯文哲) and Sean Lien (連勝文) on gay issues was also knuckle-chewingly embarrassing and shows that Taiwanese politicians are still reluctant about being associated with LGBTIQ issues. I recently saw a post on Facebook that was having a go at Taipei mayor Ko Wen-je on this point in response to this article:

我要對柯文哲說一句話：「市長暴露出無知於自己轄下城市擁有全台灣最多同志移民的事實。」這話我當時說的對象是候選人連勝文。而現在是市長柯文哲。我已經不會為此生氣了，我只覺得我們果然還有很多要努力的。但是，柯市長，你這麼快就忘了自己曾簽下的的連署書了嗎？ ///////// 日前立法院首度實質審議婚姻平權法案，同性婚姻再度受到各界關注，台北市長柯文哲也對婚姻平權議題提出看法，他表示「尊重和鼓勵是兩回事，我會尊重同性戀，但不代表我要去promotion（推廣）」。 柯文哲也補充，「對於同志婚姻『樂觀其成』，但『干我何事』，正確應該是說『我不反對，你們要做就去做』」不過媒體問到，若同志團體邀請市長參加遊行，是否會參加？柯文哲則是表態「參與的意願不高，但是需要經費會規劃發放」。 I want to say one thing to Ko Wen-je: “You’ve revealed how ignorant you are of how the city under your administration is a destination for gay migrants from all over Taiwan.” Before I had directed this comment at Sean Lien. But now I direct it at Ko Wen-je. I’m not even angry about it anymore, I just think that we still have a lot of work to do. However, Mayor Ko, did you forget about signing the petition so quickly?

Here’s an English extract from the article in question:

When the Legislative Yuan did the initial reading of the marriage equality legislation, gay marriage once again came under scrutiny from all sectors of society and Ko also surfaced to express his opinion, saying “Respecting and encouraging are two different things, I respect homosexuals, but that doesn’t mean I will engage in promotion on their behalf.” Ko then added, “I would be happy if gay marriage becomes legal, but it’s got nothing to do with me, or rather should I say I’m not against it, so if you want it to happen, go make it happen.” When asked by the media if he would attend a parade on invitation by LGBT groups, he said, “I don’t have much interest in attending, but I would provide grants as required by regulations.”

The recent large-scale protests by Christian groups, protesting the mention of diversity in reference books and equal marriage rights, also suggest that Taiwan has a long way to go in terms of accepting diversity. There has been more advocacy of gay issues within the gay community in recent years, however, which suggests that gay people are more willing to speak up for their own rights than before. This is especially true in the north of Taiwan and has deepened the divide between what the documentary portrays as the conservative south and the slightly less-conservative north, reflected in the behavior of Hsu, who is able to relax in the north and be himself, but was in an unhappy marriage to a woman in the south.

The documentary also covers the events surrounding the police raid on the AG gay gym, during which gay men were forced to strip and pose for obscene photographs and we see police reacting in a hostile way to reporters and human rights activists present at the scene. Although over recent months there has been several big raids on the G5 gay party, which attracts people from all over the world, this doesn’t seem aimed exclusively at gay people, as other straight bars have also been raided under the stated aim of cracking down on drugs and overcrowding in the months after an off-duty police officer was beaten to death outside a straight club in the city. There are also two love stories featured in the documentary, one which is linked to the raid on the AG gym and the other involving a young man who used to be a police officer. One of the original coaches of the gym later died of AIDS, and we follow his former partner who later tested negative for HIV, in his dealings with his lover’s brother. In an interesting development, it is the director, Mickey Chen, who has to ask the brother of the dead man if the story can be featured in the documentary and is told to ask the deceased himself using Jiaobei divination blocks, and gets three successful answers (聖杯) in a row. The documentary-maker is ever-present in the work and he makes it known that he is not a passive observer, but an activist, with a firm point of view.

Although at times the music was a little cloying and the documentary lost itself briefly at several points to the dramatic, this part was interesting for its portrayal of how families in Taiwan, or rather how this family in Taiwan, copes with HIV/AIDS, and how they deal with the partner of their son. In some cases it is with willful ignorance in other cases they show regret at being excluded from their family member’s life. The more engaging story of the two was that of A Yan and A Sheng. A Yan died of liver cancer, leaving a grief-stricken A Sheng behind. In likely the most moving scene of the documentary, we see A Sheng interact with A Yan’s sisters after a reunion when they’ve all had a little bit too much to drink at a KTV, and there is an outpouring of grief and resentment at how much the sisters had missed out on their brother’s life. We also see A Sheng’s new boyfriend Xiao B struggle to live up to the lionized A Yan. The dramatic, almost self-mythologizing way that the story of A Yan and A Sheng is told by the people within the documentary reminded me somewhat of the embedded story of A Feng and A Long in Bai Xianyong’s 《孽子》(An English translation called Crystal Boys is available as well as quite a good quality TV adaptation). I think that although this came across as a little Yaoi-esque, it was a justified, if rather overzealous response to the perception of gay men as incapable of committed romantic relationships. It also bears other similarities to 《孽子》, except Taipei’s New Park, the gathering site for the characters in the story (now called 228 Memorial Park) is substituted for the Hanshi Sauna (漢士三溫) run by Hsu, which I think was also featured in Tsai Ming-liang’s brilliant film The River (《河流》) as the scene of the accidental sexual encounter between father and son. Although it’s hard to pinpoint a clear narrative to the film and there seemed to be too many ideas to explore each of them coherently, the documentary does serve as a reminder of what has changed and what hasn’t changed since the late 90s and early 2000s up to now in the gay movement and the gay scene. It’s clear that the director has a discerning eye and has plenty of wit, but obvious limits with funding and manpower show through and I wish he had been afforded more resources for the film.

This post was originally posted on my blog, which you can check out here.

I’m Conor. I’m currently working as a translator at an English-language online newspaper in Taiwan after doing a masters in Taiwanese Literature at National Taiwan University. Frances asked me to suggest some books and films that might be useful for everyone to keep up their Chinese and for discussion if anyone is interested in literature. So I’m going to be blogging from time to time and welcome any feedback or comments. You can contact me at conorstuart88 at hotmail dot com.
View all posts by Conor →
This entry was posted in Member Blogs and tagged documentary, gay films, mickey chen, queer, Taiwan, taiwanese film. Bookmark the permalink.